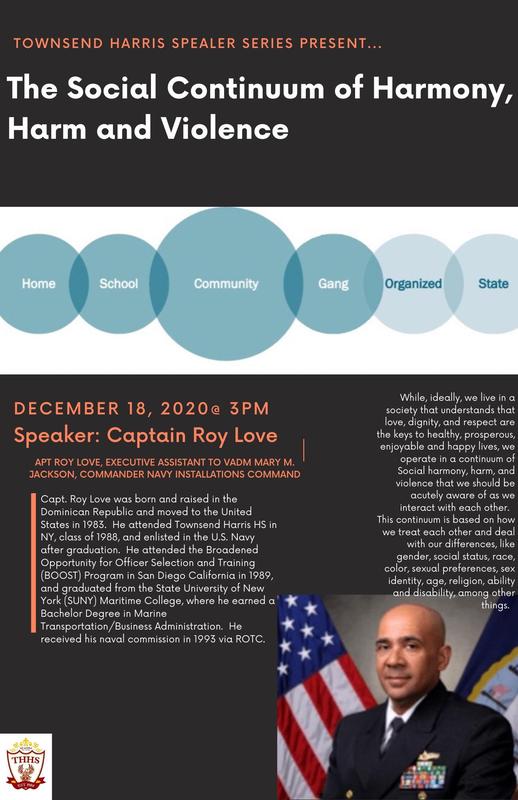 Throughout the year we will be inviting guest speakers who are leaders in their field to present to our school community, with the goal of supporting our school-wide initiatives to become a more inclusive and antiracist Townsend Harris HS.  We hope that all members of our community can attend and serve as partners and leaders in this meaningful work!

Captain Roy Love will be our guest speaker Friday, December 18th at 3pm. Please take a few minutes to read his impressive bio below.

We will be using Zoom for this event (link below). We are inviting students to join this special event as a “live” audience, with cameras on. Please use your @nycstudents.net account to sign into the Zoom. Our priority is to have current students attend and participate. Our Zoom meeting will hold 250 people. If we hit maximum capacity and you are locked out, our E & A Speaker Series will be recorded and shared with the entire community. We do ask for as many participants as we can get who are willing to attend “live.” This is a unique and wonderful opportunity for our students!

You are invited to a scheduled Zoom meeting:

Capt. Roy Love was born and raised in the Dominican Republic and moved to the United States in 1983.  He attended Townsend Harris HS in NY, class of 1988, and enlisted in the U.S. Navy after graduation.  He attended the Broadened Opportunity for Officer Selection and Training (BOOST) Program in San Diego California in 1989, and graduated from the State University of New York (SUNY) Maritime College, where he earned a Bachelor Degree in Marine Transportation/Business Administration.  He received his naval commission in 1993 via ROTC.

Ashore, he served as Maritime Prepositioned Forces (MPF) Officer for COMNAVBEACHGROUP TWO (1997-2000).  He attended the Naval War College in Newport Rhode Island, where he earned a Master of Arts Degree in National Security and Strategic Studies, and completed his Joint Professional Military Education in 2008.

Following his tour at the Naval War College, he deployed to Iraq during Operation Iraqi Freedom on an Individual Assignment in support of the ARMY 304th Sustainment Brigade stationed at Joint Base Balad as Team Leader of the NAVY’s Petroleum Oil and Lubricant (POL) Detachment (2009), managing and distributing fuel across all of Iraq in support of US and allied forces.

CAPT Love reported as Commanding Officer of USS BOONE (FFG 28) in June 2010, where he led the ship in winning the Battle Efficiency award in 2011.  He completed his tour on BOONE in December 2011 and assumed Command of Afloat Training Group Mayport in Jacksonville Florida.  He reported to OPNAV N96, Surface Warfare Directorate in 2013, and served as Branch Head for Cruiser and Destroyer modernization until April 2014.  Following his tour at OPNAV, CAPT Love served in the Joint Staff, Joint Chiefs of Staff, as Joint Division Chief for PACOM, NORTHCOM, and SOUTHCOM, under the Deputy Director for Regional Operations (J35) from 2014-2016.

In August 2016, he assumed command of Naval Base San Diego (NBSD).  CAPT Love culminated his tour as Commanding Officer of NBSD in July 2019, after leading the base in winning the Commander in Chief Installation Excellence Award.

He is currently serving as Executive Assistant to VADM Mary M. Jackson, Commander Navy Installations Command, who leads 11 Navy Regions and 71 Naval Installations worldwide, with over 50,000 employees and over $200 Billion in assets, and a $10B annual operating budget.

And he’s also an alum, Townsend Harris class of ‘88!